2019 promises to be an interesting year for energy management, with continuing technological progress and some important policy changes.

According to the Energy Managers Association, here are the top trends to watch:

The final guidance for SECR will be published in January with the scheme coming into effect in April. Although the final guidance is still to be tweaked, it is really only setting out the obligations placed on organisations.

If you are a large company listed as such by meeting two of the following three criteria; 250 employees, £36 million turnover and an £18 million balance sheet you will need to comply. The public sector is not covered unless they own entities that undertake commercial activities and there is no need to file a report if you use less than 40,000 kWh during the reporting period.

So here are the main actions your company will legally need to undertake:

As per usual, the SECR reporting requirements are based on taxation. This will come in the form of increased Climate Change Levy (CCL) rates beginning in April of 2019. The rates have been set out, and are charged based on the amount of electricity, gas, and fuels consumed within your organisation. The rates are charged by the energy providers and are shown on your bill.

This all sounds quite a lot of work but we at the EMA aim to help you create the report with the least stress possible. The upside in this process is that the Board will finally have to take energy use and efficiency seriously by law and that should mean that the importance of energy managers will be a lot higher in 2019 than 2018.

We are now in Phase 2 of the ESOS compliance scheme so let’s recap some facts. The ESOS Regulations 2014 is a reiteration of the Article 8 of the EU Energy Efficiency Directive and mandate that large organisations in the UK undertake comprehensive assessments of energy use and energy efficiency opportunities at least once every four years.

In broad terms, ESOS applies to any large undertaking that carries out a trade or a business (a Company), and any corporate group where at least one member of the UK group meets the ESOS criteria.

A large undertaking is one that:

Most public sector bodies do not fall under ESOS, however, organisations that receive some public funding, such as universities, may have to comply.

If you are unsure if you qualify for ESOS, refer to full ESOS guidance, which includes additional information on how to assess if your organisation qualifies.

In order to comply with ESOS, the large UK organisations are required to take 5 important steps before the compliance deadline of 5 December 2019:

ESOS is part of British law so even a hard Brexit will not change the requirement to report.


Electric Vehicle (EV) tech is improving and for those who own one the driving is great.

Against the backdrop of improving technology and accelerating climate change, the UK Government has published its Road to Zero Strategy, which foresees that a third of the UK’s fleet on the road in 2030 will be electric. The government has also vowed to end sales of internal combustion vehicles in the UK by 2040.

This is an optimistic prediction considering 2030 is only eleven years away. Furthermore, there is a problem with zero emissions at the tailpipe, as the energy must be provided by the grid and the resulting load will not be inconsiderable.

A privately owned EV can roughly double the electricity use of the average UK home. As a result, one-third of the current UK fleet, or 10 million vehicles equates to the power needed for approximately up to 10 million new homes.

National Grid forecasts that EVs will create an additional 18GW of demand by 2050, which is one-third higher than today’s peak demand.

The scale of generation needed is not in the pipeline and it is an open question whether they could be built in time. All our present wind assets together have 20GW of capacity, enough to power 14 million homes, with 30GW forecasted by 2030.

Don’t get me wrong there will be a huge increase in the number of electric vehicles on the road, but the charging infrastructure needed and local power constraints which will kick in with mass ownership will be a real headache.

These increases in EV charging demand will have to be managed by better consumer engagement, smart-charging technology, and other innovative vehicle-to-grid solutions at scale.

4. The Energy uncertainty of Brexit

With European energy interconnections forecasted to account for one-fifth of UK consumption by 2025, the implications of Brexit on energy prices will be important. 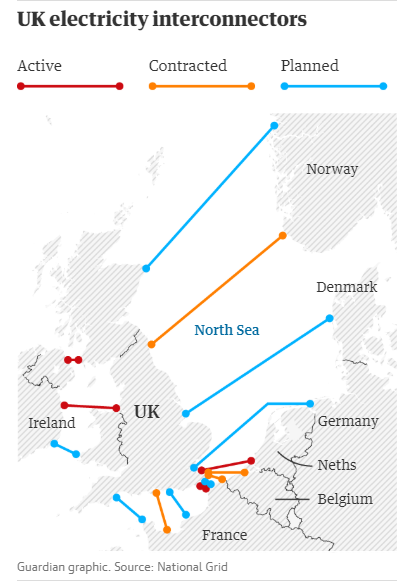 Given that energy suppliers purchase energy months or years ahead, the uncertainty will give rise to significant risk premiums on energy prices. The increasing risk will lead to higher consumer prices, a major problem for long-term business planning.

Additionally, regulatory uncertainty extends to the European Union’s carbon pricing, leaving the UK’s companies unclear on whether the same rules will apply post-Brexit.

Despite a foggy future, maintaining the energy status quo serves to benefit incumbent suppliers and consumers on both sides of the English Channel. Any major disruption will be negative for all market participants, and therefore issues relating to trade friction and disruptions are the highest risks.

Whilst it is unlikely that the lights will go out without strong agreements in place, it is going to be a less efficient market in the event of a disruptive Brexit. In any uncertain scenario resulting from Brexit, the UK’s security of power supply has to become a top priority, rather than being considered a minor problem.

This is one area that could become really exciting in 2019 because your site could benefit from hosting batteries. Work is being undertaken to allow DNOs to source contracts for battery services in the area of Demand Side Response.

Simply put, the DNO could work out the cost of upgrading, reinforcing or building in resilience and instead of building new substations, they could meet their requirements by contracting out demand reduction services through contracts with independent aggregators.

The aggregators would install batteries at large sites that use power at peak. Energy stored off-peak would be used to reduce power. The demand reduction would not require the site to reduce energy use but use the stored power thereby reducing demand from the grid. Such contracts could help sites through load shifting turn peak time use into a profit centre.

If this sounds a little confusing it is because it will be a slightly complicated process but for energy managers the result will be someone else paying for the batteries, installing them, managing them and rewarding you for the privilege.